Browse over this invaluable resource that provides Town residents with a comprehensive directory of property developments, plans, guidelines, bid opportunities, and other helpful information.

The roof on the pavilion at Heritage Park has outlived its design life. Ponderosa Roofing and Steel Works placed the low bid to remove and replace the existing shingles. The project will also mount a ladder to the side of the pavilion to make it safer to gain access to the roof. The project will also provide a new coat of stain to the pavilion. The pavilion will receive a much needed face lift.  The cost of construction will be $55,555. Construction will start in mid September 2022 and will finish within 30 days.

Bell Street is a short street between US Highway 395 and Circle Drive.  The storm drain under Bell Street is deteriorated to the point it has no bottom.  Between May and June of 2022 Qualcon Contractors Inc removed and replaced the deteriorated asphalt, curb, gutter and sidewalk as well as install new sidewalk on the south side of Bell Street. Approximately 300 feet of new concrete storm drain was placed and deteriorated metal pipe was removed. An old NV Energy galvanized steel street light was replaced with a Town decorative street light. The cost of the project was $430,000.

The Project consists of reconstructing the road and installing new sidewalk ramps, survey monument, valley gutter, driveway, curb, gutter, and striping.  Work began on April 19, 2021 and was completed on May 25, 2021.  The selected contractor was West Coast Paving Inc.  The cost of the project was $261,000.

The Town of Gardnerville completed a project to seal the streets in and around Carson Valley Estates and Toler Lane.   The selected contractor was Intermountain Slurry Seal Inc. The work was completed on July 1, 2021 at a cost of $85,230.

In the summer of 2020 sidewalks were constructed on High School Street between Douglas Avenue and US Highway 395.  The new sidewalks allow pedestrians including middle school students to complete their walk to school without having to travel in the vehicle lanes.  The work was completed by ARMAC Construction LLC for $44,020.

In February of 2020 Four Point Engineering installed approximately 300 feet of new storm drain as well as regraded the Martin Slough.  The project was done to provide for a better future alignment of both High School Street and the proposed bike path.  The regrading of the slough provides more storm water capacity and erosion protection The work was completed at a cost of $93,285.

In conjunction with NDOT the Town of Gardnerville installed two “rapid flashing beacons” on US Highway 395 and the intersections of Mill Street and High School Street. When activated by push buttons the new rapid flashing beacons alert motorists of the need to yield to pedestrians.  The project also updated the curb ramps to be ADA compliant and increased the capacity of the storm drains.

The outlet piping at the Gardnerville Station is completing the permitting process. American Rescue Plan Act (ARPA) Funds were provided by Douglas County in the amount of $250,000 for construction of this storm drain. It is anticipated that local funds will be used to supplement the ARPA allocation. Construction is expected to start in mid-September 2022. NDOT plans to reconstruct the pavement on US 395 in Spring of 2023 and connect their storm drains to this project. Site work is anticipated to occur during fiscal year 24/25.

Design of the outlet piping at the Gardnerville Station is underway.  The work should begin in the 21/22 fiscal year.  The outlet piping will take the runoff from Hwy 395, divert it into the tanks that were already installed at the Gardnerville Station and send it through piping under Mission Street to the Hellwinkel Channel.  This will alleviate the flooding that occurs on that section of roadway.

A 13,000 cubic foot precast concrete detention reservoir is being constructed under the future parking area at the station.  NDOT will connect new storm drains to the reservoir when the highway is reconstructed in 2022.  Next year the town will install outlet pipes from the station to the Martin Slough.  Once the storm drain is connected and the highway is reconstructed the Town can proceed to complete the site work.  The detention reservoir was paid for in large part by a Community Development Block Grant. 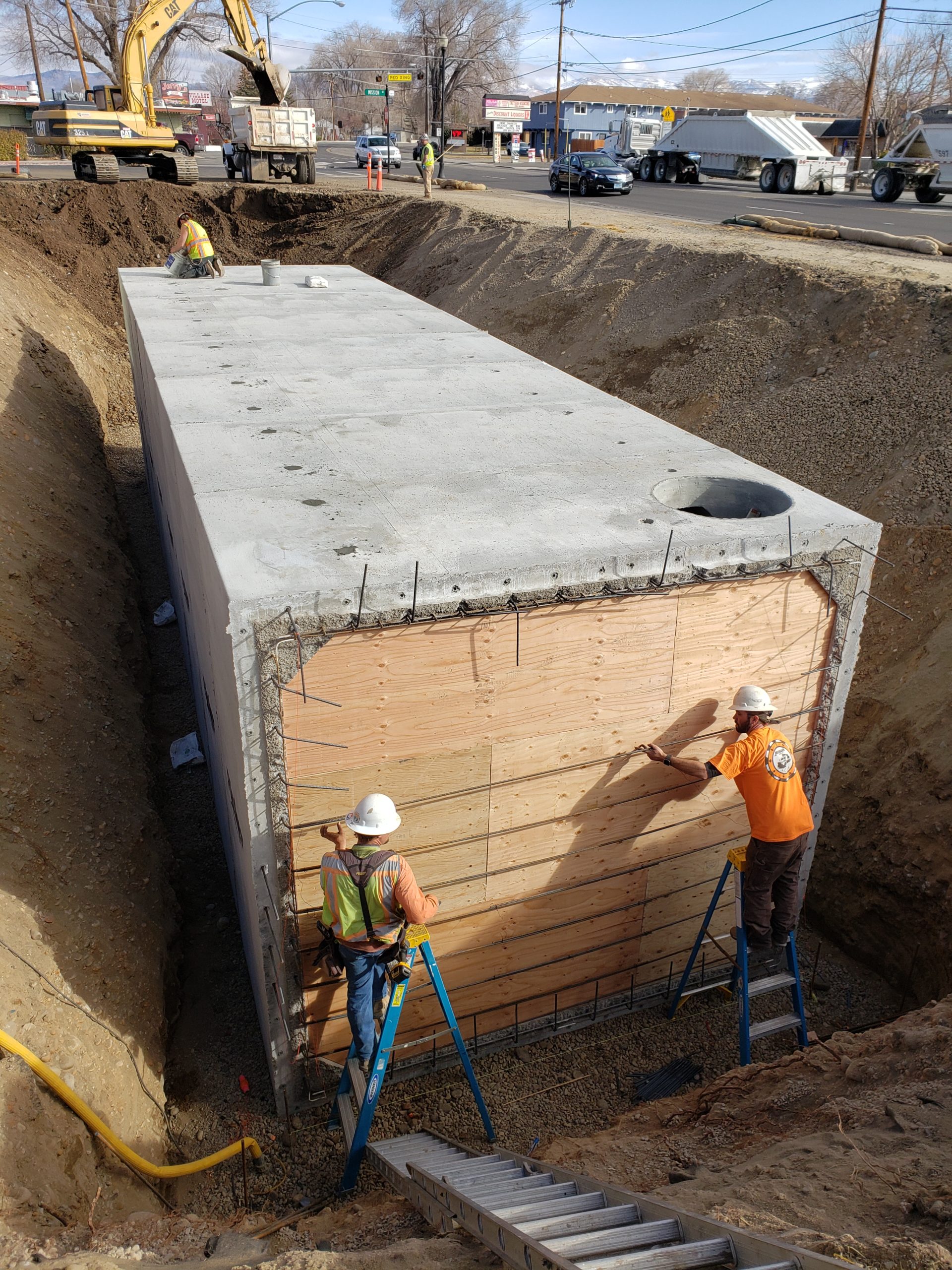 UPDATE 8/14/18:
The Ribbon Cutting ceremony has been cancelled and will be rescheduled in the near future.

UPDATE 12/1/18:
The Town of Gardnerville, along with Main Street Gardnerville and the Carson Valley Chamber of Commerce, held the Ribbon Cutting for the Gardnerville Station on Monday, December 17, 2018 at 4:30 pm. Attendees enjoyed hors’ d’oeuvres & beverages as we celebrated the newly refurbished gas station that was deeded to the Town of Gardnerville by the Douglas County Board of Commissioners in 2013. It has been five years and with the help of NDEP (the Petroleum Fund) and Douglas County (grants from CDBG) we are completing the renovation of the building.  Gardnerville Station is located at 1395 Hwy 395 N, corner of Mission Street and Hwy 395 N.

UPDATE 3/19/18:
We have, with many thanks to McGinley & Associates and BRAMCO Construction, finished the site cleanup phase of the project.  This last round of work removed the remaining known contaminated soils on the site.  A total of 675 tons of material was removed from the site, well over the anticipated contamination area by almost a factor of 4.  Thank you to the state staff and board of the State Petroleum Fund for all the support getting this site cleaned up.

The Dube` Group finished the building renovation improvement plans,which the town submitted for a building permit in April.  We will be installing an underground storm water detention system allowing the highway storm water to discharge into the new Hellwinkel channel.  R O Anderson Engineering is working on the flood modeling of both the channel and the "S" curve area.

The bid for building renovation went out and Simerson Construction LLC is in the process of being awarded the bid. The State Community Development Block Grant (CDBG) will fund the building improvements and underground storage tank needed. 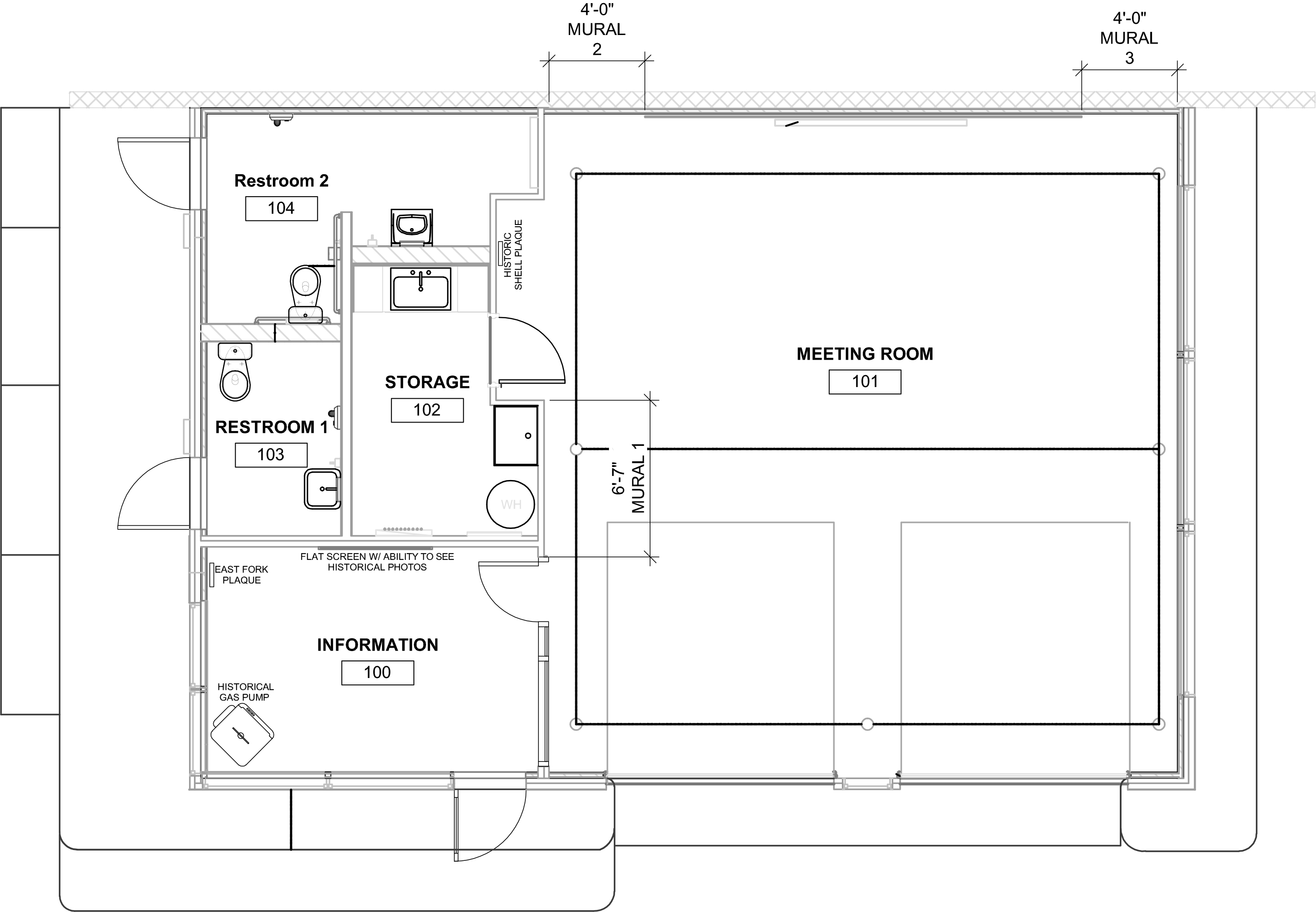 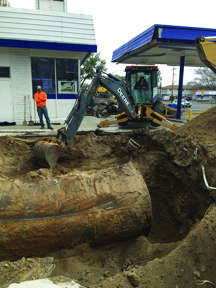